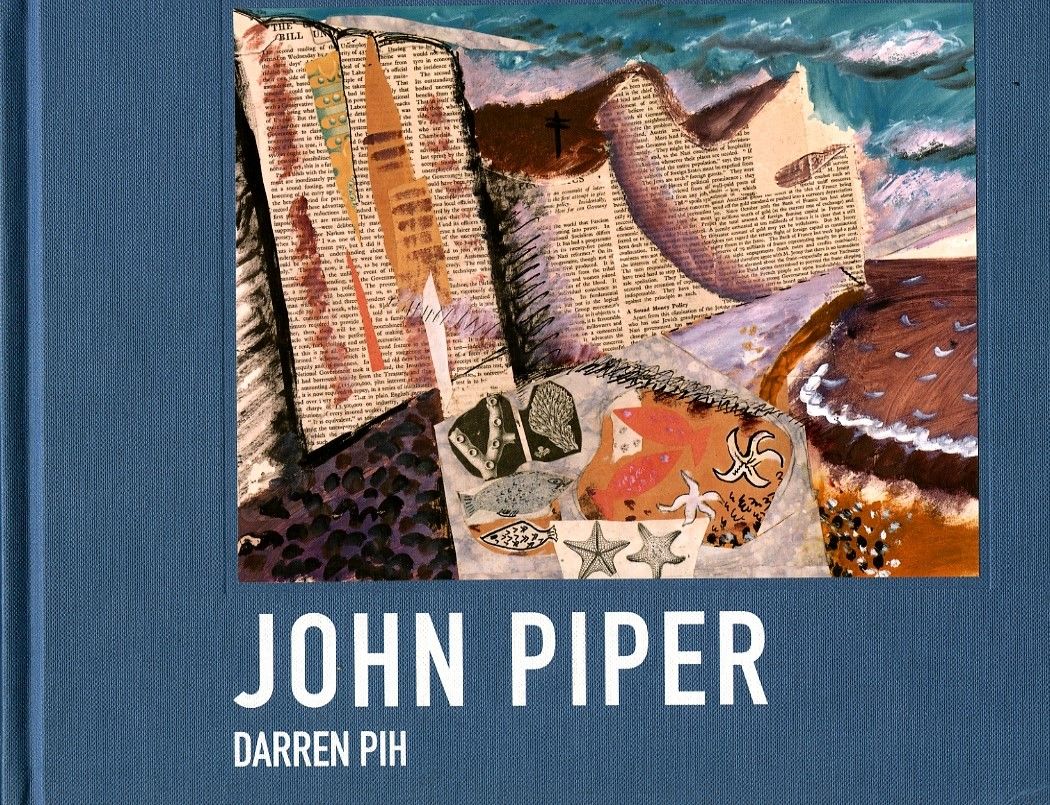 John Piper by Darren Pih; (and my thoughts on the 1930's beach collages)

10/02/2020
I have always had a bit of a soft spot for John Piper's Collages and when I saw a copy of this book in Booth's Bookshop in Hay on Wye I couldn't resist. The book essentially accompanies an exhibition at the Tate in Liverpool in 2017,

Our exhibition focuses especially on Piper's role as a conduit of international abstract art in Britain.....(it) also shows how Piper developed a profound affection for earlier historical art forms and the natural world which exerted a powerful hold on his imagination throughout his career. (p127)

Although the exhibition coincided with the fiftieth anniversary of the stained glass design for Liverpool Metropolitan Cathedral, most of the text and images in the book are of the period between 1933 and 1945. With his early work the coast forms a coherent theme onto which Piper experiments with a range of techniques influenced by artists such as Arp, Braque and Picasso. Soon he is using collage as part of his paintings to provide texture, stencil or to counterpoint text with texture. He then diverts into abstraction for a time although his work still has something of a coastal feel. By the late 1930's Piper has become a romantic artist of buildings and townscapes which leads neatly into his career as a war artist and perhaps his most famous depiction of Coventry Cathedral after it had been bombed in 1940.

The best thing about this book is that it is well illustrated and the pictures are a decent size and this makes it easier to have a closer at three of Piper's beach collages. (Hope Inn near Newhaven, Beach with Starfish and Beach and Starfish both near Seven Sisters.). All three seem to have been made at the same time as they have printed elements taken from the same book and newspapers.

The works...have a joyously spontaneous feel which is enabled by the speed and efficiency of using printed papers. The gouache and ink additions embellish the scenes to evoke dramatic seaside weather and lighting, creating a sense of energy within the composition. (p32)

All three collage share the same composition, but the two of the Seven Sisters also share the same or similar pallette, they are essentially brown, grey and blue with the newspaper type cliffs forming a significant element of both. The printed illustrations are dead centre in the lower half perhaps

...being arranged on a table, alluding to the cubist layering of pictorial space as a collage technique. (p32)

This is seen in other paintings by Piper such as Beach with Shells (1933) and Houses on the Front (1932), although these are clearly defined as tables, and framed by curtains and shutters, with a pictorial coastal vista beyond.

The foreground of the beach collages makes the tables far less distinct so they blur into the beach itself.

Compositionally the viewer's eye is led around the image by the strong diagonal at the base of the cliffs and the curving wave front leads back to the wide beach at the bottom of the picture. In two of the collages lighthouses serve as counterpoints to keep the viewer's gaze.

(In contrast Newhaven, The Castle (1934) is too flat and lacks the exaggerated perspective of the beach collages. The cliff disappears and the buildings compete jarringly with each other. Harbour Scene, Newhaven (1936-7) a later collage suffers from an intruding blank harbour wall and benefits from being cropped in half.)

The contrast between the sharp edges of the light collage and the fast solid gouache paint work creates a dynamic and life to these images. Personally however I prefer Hope Inn (1934) where much of the collage of the newspaper print of the cliffs has been obliterated by paint. Indeed the cliffs to the left of the painting are more or less totally abstract in form with alternating paint and collage strips.

Ultimately these images contain a lot of movement, this is due to the composition and the juxtaposition of the materials and energy of execution, and I think that is what attracts me to them.
Next
Previous